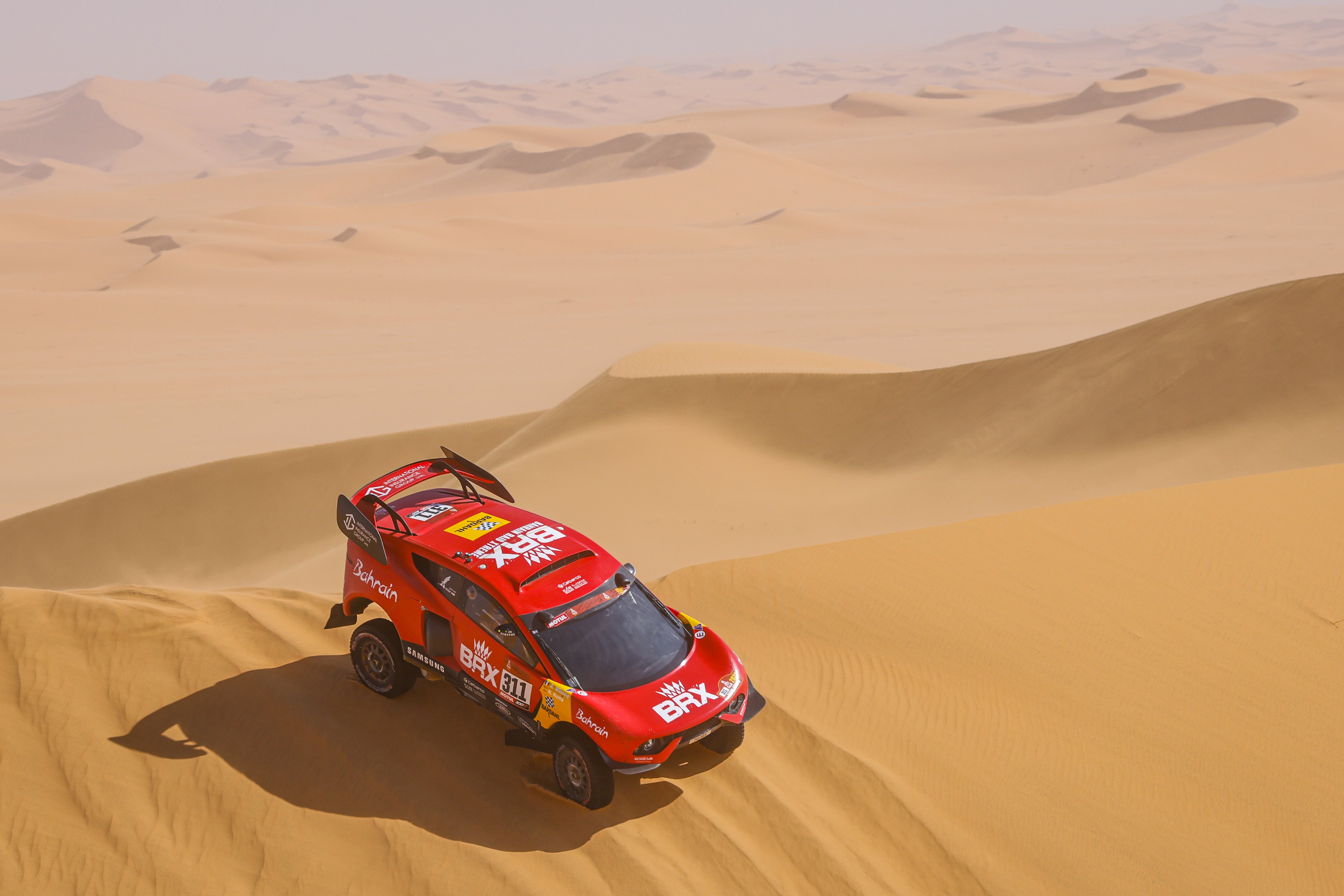 BAHRAIN RAID XTREME REFLECTS ON ITS FIRST TASTE OF DAKAR RALLY AND LOOKS AHEAD TO THE MARATHON STAGE
REST DAY: HA’IL

Bahrain Raid Xtreme (BRX) and its T1 class Hunter has completed the first half of its maiden Dakar Rally adventure, reaching the halfway point at Ha’il, Saudi Arabia.

The Dakar Rally – notably one of the most challenging feats in motorsport – has served BRX drivers, Loeb and Roma, with challenging driving conditions and tested the navigation skills of their co-drivers. Both drivers have been impressed by the Hunter’s performance, speed, resilience and the capabilities needed to compete in the Dakar.

Roma, who had to replace his co-driver just days before the first stage of the rally, has consistently shown the pace of the Hunter over the first six stages, and now sits 5th overall, +1:36:55 behind the leader. Loeb had to overcome a broken wishbone on stage six, but completed the stage, meaning he will continue to challenge for stage positions for the remainder of the rally. He is 44th overall, but that does not reflect the impressive speed he has shown across the stages.

With six stages of the Dakar Rally 2021 complete, the team now looks towards the second half of the rally; taking learnings from the first half of its debut year in motorsport’s toughest test of endurance.

The drivers will embark on stages seven to 12, for the second half of the contest, beginning part one of the marathon stage from Ha’il to Sakaka; with 267km of road driving and 471km of special stage. The Dakar Rally route will then take Loeb and Roma through the city of NEOM, an ambitious beacon of sustainability within the Kingdom of Saudi Arabia, before eventually winding its way back to Jeddah via the hills, valleys and coastline.

Speaking at the halfway stage, BRX driver Nani Roma said: “So far, I think we have had a good rally. Each day Alex [Winocq] and I work better together, and we are really enjoying it. The stages are challenging, but that is Dakar and that is cross country rallying. Of course, the navigation has been difficult, and this is something we will try to work on for the second half of the Dakar. The Hunter has been amazing – it is the first time the car has competed in the desert and the performance is really very good. I am excited to see what we can do over the next six days.”

Sebastien Loeb, in the #305 Hunter will compete for stage wins for the second half of the rally. Speaking on the rest day from Ha’il, the BRX driver added: “On stage six we suffered a broken wishbone which we were notable to fix ourselves. This now puts us out of contention. We are pleased that we were able to fix it and will be able to compete in the second half of the rally. This is obviously not the outcome that any of us wanted, but we have a good car in the Hunter, and we will continue to compete for stage wins.”

Richard Thompson, BRX Chief Engineer, added: “The last six days have been an incredible journey for BRX. Nani’s car has had next to no problems and he now sits fifth in the overall standings, which we are very happy with. For stage six, he was able to follow Carlos Sainz for around 40km of the stage – which gives him great confidence in the Hunter. Both drivers have experienced navigational issues, which has been challenging. Of course, there are things we learn from, and things we will adapt for next year, but to be learning and improving every day is a big positive for us. The next six days are not going to be any easier, but we will work hard over the rest day, catch up on sleep and be as prepared as possible to take on the second half of the rally.”