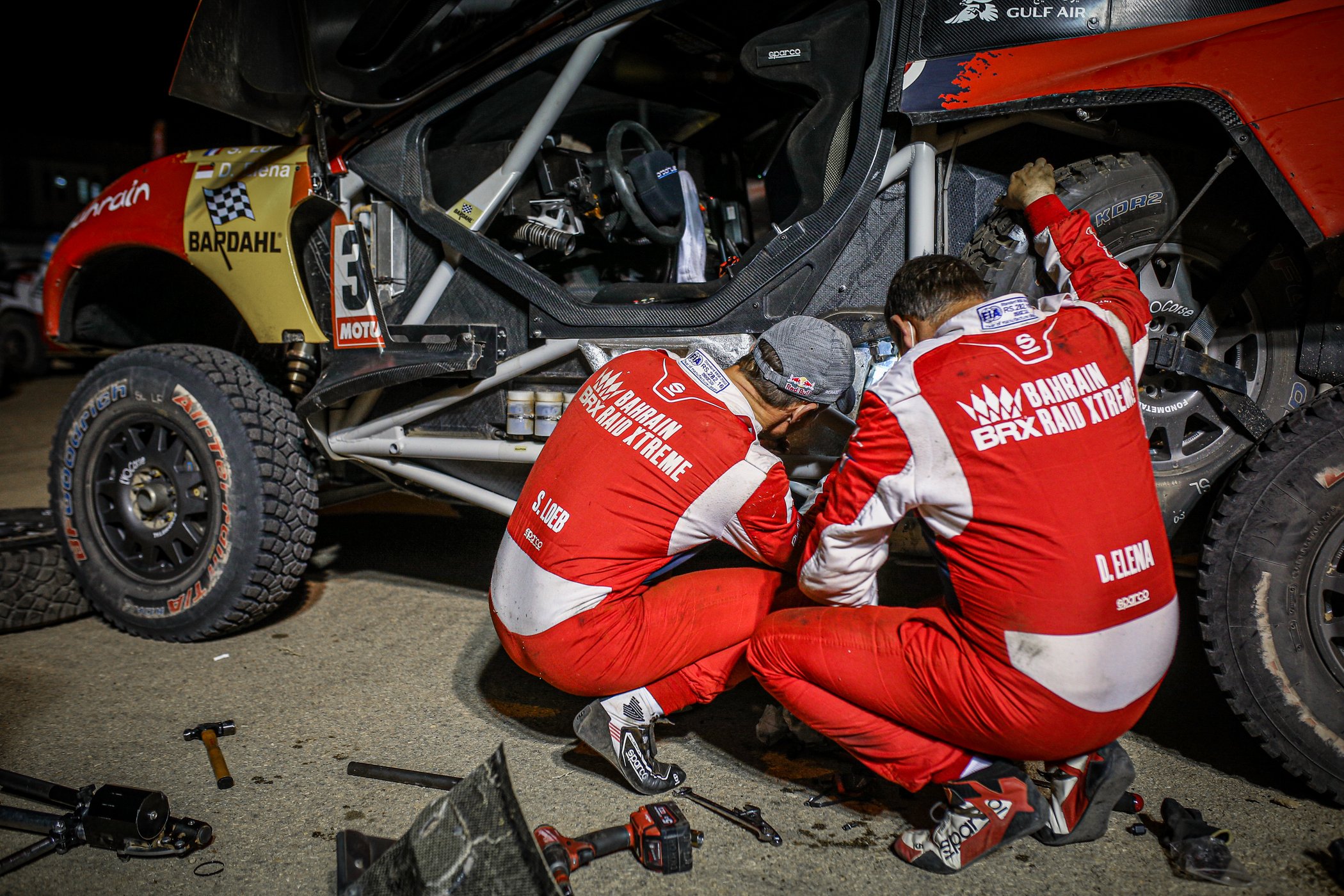 After the rest day in Ha’il, Bahrain Raid Xtreme drivers, Sebastien Loeb and Nani Roma, had the first part of the marathon stage in front of them; for stage seven of this year’s Dakar Rally.

The marathon stage is a unique aspect of the Dakar Rally. Split over two stages on consecutive days, the drivers are without the safety net of their assistance teams, and any vehicle repairs or maintenance need to be completed by the drivers and co-drivers themselves.

Leaving Ha’il, Loeb and Roma had 737km of driving; 284km of road and 453km of special stage, making their way to Sakaka. The rest of the Bahrain Raid Xtreme team headed to Neom, where the drivers would reconvene with them ahead of stage nine.

Roma added another strong performance to his run of Dakar Rally 2021 stages, again showing the speed of the Hunter and finishing in Sakaka in 10th, with a time of 04:44:52, +22:53 behind the leader. The Spaniard is currently 5th overall, +1:59:00 behind the leader.

Commenting after the first half of the marathon stage, BRX driver Nani Roma, in the #311 Hunter, said: “The stage was not easy in the beginning; the sand was super soft in areas, so the fuel consumption was high. There was some tricky navigation and a puncture to deal with. But things are positive, the car is in good shape, and we are ready for the mountain stage. Alex and I are going to spend time working on the car and prepare everything for tomorrow.”

Sebastien Loeb bounced back after a challenging day during stage six, again showing the skill that has made him so synonyms with rally driving. However, 30km from the finish, a mechanical issue forced Loeb and co-driver Daniel Elena to stop to make repairs, costing the pair time. Arriving in Sakaka after 06:12:29 of driving, the #305 Hunter finished the day in 42nd,+1:50:40 behind the leader. This leaves Loeb in 41st, with an overall rally time of 40:09:18, +13:32:28 behind the leader.

After reaching Sakaka, Loeb said: “It was another complicated day for us. We started with a good rhythm, but the start of the stage had some rough terrain, and we got a puncture and then damage to our jack, so we had to hope we didn’t get any more punctures. After that we were going well until the end of the stage, when we broke a wheel bearing, so had to stop and make repairs. But we completed the first part of the marathon stage, we will work on the car, and be ready to go again tomorrow.”

The second half of the marathon stage takes the drivers from Sakaka to Neom, covering 709km, with 344km of road and 375km of special stage driving.