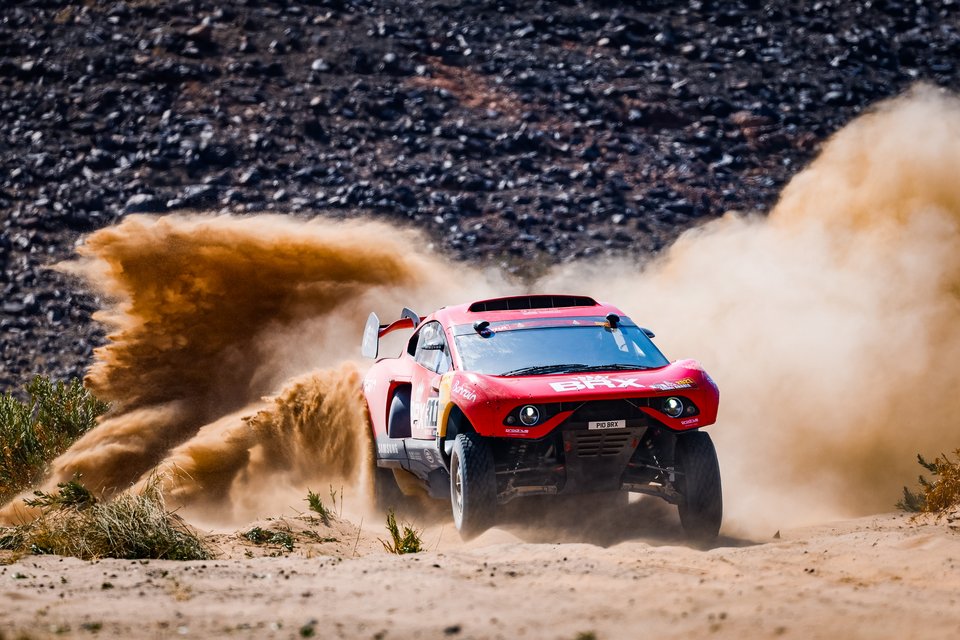 The longest stage of the Dakar Rally 2021 was the challenge ahead of Bahrain Raid Xtreme for stage four. Sebastien Loeb and Nani Roma had to make the 813km journey from Wadi Ad-Dawasir to Riyadh; the Kingdom’s capital, taking on 476km of road and 337km of special stage driving.

The previous day’s driving was pure desert and dunes, threatening navigational challenges, but with vast open expanses to allow Loeb and Roma to show the Hunter’s speed. In contrast, today’s stage offered long winding desert and dirt tracks designed to test the driver’s technical ability, but also provide a chance for them to really enjoy themselves behind the wheel.

With nine World Rally Championship titles to his name, Sebastien Loeb, in the #305 Hunter, needed no invitation in using his experience with this type of driving. Avoiding any punctures but with a slight navigational error, Loeb finished the stage 4th but was handed a five-minute penalty for speeding on the stage, resulting in a final stage ranking of7th with a time of 02:43:35, +7:36 off the stage leader. The time penalty now puts Loeb in 7th overall.

Nani Roma, driving the #311 Hunter, continues to climb the rankings as he and co-driver Alex Winocq cement their partnership that started just days before the first stage of the rally. Roma completed stage four with a time of 02:49:39, +13:40 off the stage leader. This earned Roma 13th for the day and 10th overall, with a deficit of +1:17:50 to the overall leader.

Nani Roma, who sits in 10th overall, said: “It was a good day but not easy. A long route with plenty of fast and twisting tracks in some areas, and a lot of dunes. We are happy though; the car is still performing fantastically. Tomorrow we are expecting a harder day though, so we must take some time to rest and let the team prepare the car, but we are excited for the challenge.”

Richard Thompson, BRX chief engineer, said: “We had a pretty clear run today as a team. Seb had a few navigational errors, but thankfully it didn’t cost us too much time and Nani had a good day technically, with just one slow puncture and a few navigational errors himself. The navigation is challenging everybody though, as we have seen on previous stages; one wrong turn can have an impact. Now we are just going to keep pushing but the Hunter is doing a fantastic job.”

The Dakar Rally leaves Riyadh towards Al Qaisumah for stage five, on a 661km route, with 205km of road and 456km of special stage driving.