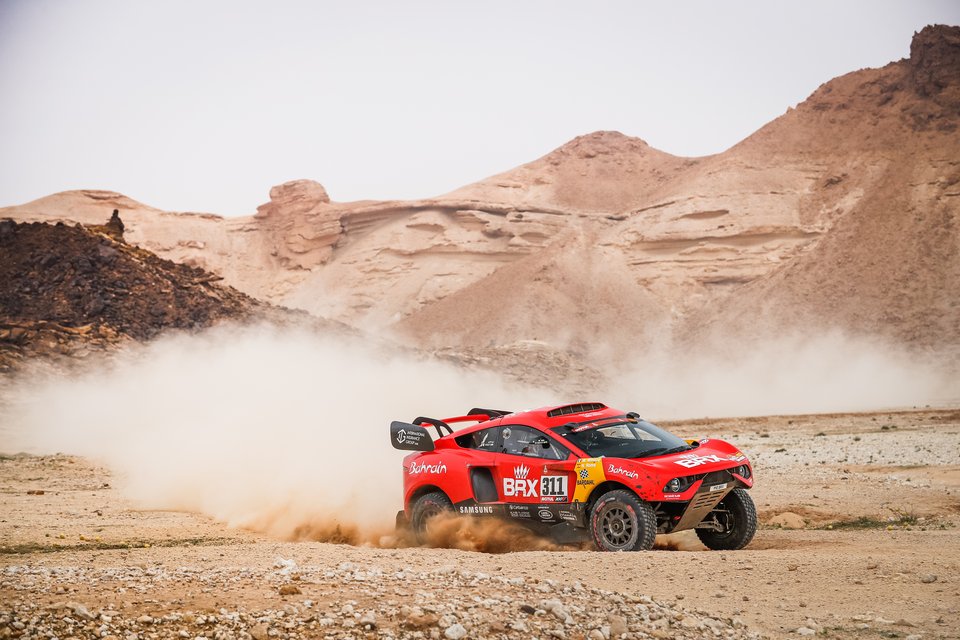 Setting off from Riyadh, the Kingdom’s capital, towards Al Qaisumah, Bahrain Raid Xtreme faced a technically challenging day of driving, with winding stony tracks to navigate over the course of the 661km stage. Sebastien Loeb suffered an early navigational error before a series of punctures that added nearly an hour to his day’s driving, leading to him finishing 20th for the day with a stage time of 05:59:43, +50:18 off the stage leader. This puts Loeb in 10th overall, +1:40:07 behind the current leader.

Fellow BRX driver, Nani Roma, was hunting down a top three place at certain points of the stage, but also suffered his own navigational difficulties that placed him 8th with a stage time of 05:19:56,+10:31 off the leader. After five stages, Roma keeps himself in the top ten, 7thoverall, with +1:24:56 behind French driver Stephane Peterhansel.

After successfully completing stage five, Nani Roma commented: “It was a tough stage, and a long stage. At the beginning the navigation was not easy; at one point I saw Seb in front, facing me, and other cars turning around. At that point, I thought today is going to be tough. Alex and I slowed at one point to make sure our navigation was perfect. After that it was good, the car was going well, but it was one of those days to slow down, ensure you make good decisions and not all about attack.”

Arriving into Al Qaisumah, Sebastien Loeb added: “We started today in a good rhythm and quickly caught up to three cars, one of which was Carlos Sainz, so we followed him but together we got lost. From that point we struggled to find the way, then we entered the speed limit zone. After that though, we made a clean stage, which was good.”

“For this Dakar, so much is about navigation. In my first Dakar, a driver could make more of a difference because we were driving on tracks and the driving was important. Now, the difference a driver can make by driving fast is very small, compared to what we lose by searching for waypoints.”

Richard Thompson, BRX chief engineer, said: “It went wrong before the stage really started for Seb, with a navigational issue on the way to the first waypoint, which cost him time. After that though, we had a really good run through the stage and set some fantastic sector times. It’s just routine maintenance tonight, which is another huge milestone for the team; another day showing our pace and a good day of learnings for 2022. We certainly need to work hard on the navigation and put some mechanisms in place, but from a technical perspective a very positive day for Seb and Nani. After the rest day, going into the marathon stage, we can take a lot of confidence based on the performance of the cars.”

For stage six, the drivers have a 517km route, split over170km of road and 347km of special stage driving. Primarily dunes, Loeb and Roma will make their away across the Saudi Arabian desert on their way towards Ha’il, the location of their Dakar Rally rest day.