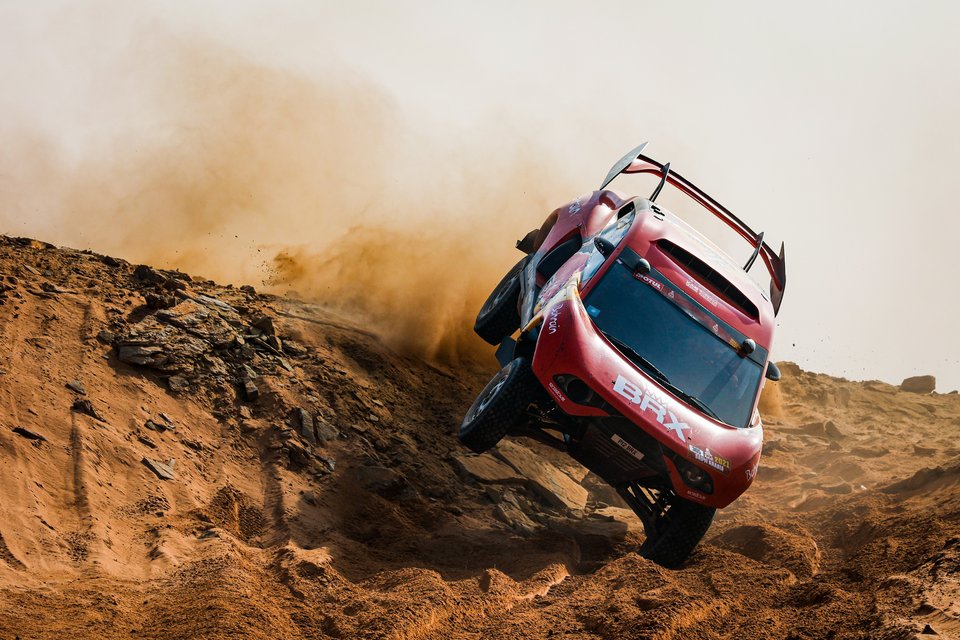 TOP 5 FOR ROMA, BUT LOEB FORCED TO RETIRE FROM DAKAR RALLY
STAGE EIGHT: SAKAKA TO NEOM

The second leg of the Dakar Rally marathon stage was a709km stage from Sakaka to Neom, made up of 334km of road and 375km of special stage driving.

The demands of the marathon stage require that drivers and co-drivers are responsible for the maintenance and repairs of their vehicle in between the two consecutive stages that make up the marathon. Limited support from the Bahrain Raid Xtreme team is available, apart from a team support truck that must track the same route as the drivers to assist them.

After essential work to both cars the night before, Roma and Loeb set out from Sakaka towards Neom. Loeb encountered two punctures during stage eight but did not have enough spare wheels to be able to continue, and was forced to retire from the stage, and, as a result, this year’s Dakar Rally.

Nani Roma on the other hand continued his consistent run of form through stage eight, highlighting the Hunter’s speed, to finish just outside the top 10, in 11th with a stage time of 03:20:58, +24:02behind the leader. This result means Roma maintains his position in 5th overall, +2:20:59 behind the leader.

Additionally, Roma made an unexpected stop during his stage, when a motorcyclist crashed 200m in front of the Spanish driver. Stopping to help the injured competitor, Roma waited until Dakar Rally paramedics had arrived, before resuming his progress.

Commenting after arriving at the bivouac in Neom, Roma said: “It was a tough day for us. Early this morning we realised that the support truck was stuck on the previous day’s stage, so didn’t have all the spare equipment we might need. Alex did a great job in preparing the car though, but we knew we had to be careful to reach the next bivouac. Also, during the stage we saw a bike crash just in front of us, so waited until the helicopter with paramedics arrived. That meant other cars caught us up and then we had to drive in their dust. It was a stressful stage in parts, but overall, it was positive, and we are ready for tomorrow.”

French BRX driver, Sebastien Loeb, who will not be competing in upcoming stages, added: “We have faced a lot of challenges in the last eight days, but throughout this Dakar, myself and Daniel, my co-driver, have been determined to reach the finish of the rally. Everyday we remind ourselves how lucky we are that this is our job, and to be part of the BRX team. We came to the Dakar with the same ambition as the team; to achieve great results, but today we had no other choice but to retire. This morning we made the decision to give Nani and Alex our spare wheels, to optimise their chances, but with punctures during the special stage, it was impossible for us to go any further. I am disappointed for the team, but we have learned a lot of lessons, and will come back stronger next year.”

Stage nine of the Dakar Rally, is a looped stage, leaving and returning to Neom; 574km in total, with 109km of road and 465km of special stage driving.